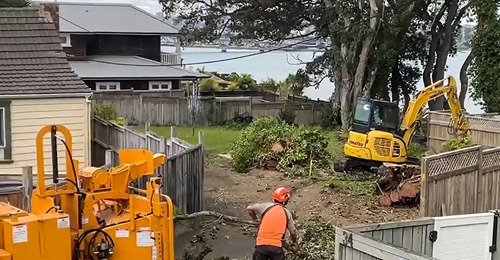 It is outrageous that a protected pōhutukawa has been cut down in Birkenhead Point without permission.
Since general tree protection was removed some years ago, the only privately-owned trees that are protected are those listed as scheduled trees in the council’s Unitary Plan. These trees can only be trimmed, cut down or have work done in the root zone if a resource consent has been granted. The penalty for someone cutting down a scheduled tree without consent is a fine of up to $300,000 or a jail sentence of up to two years.
With more and more trees being cut down when land is clear-felled to build new housing, it is more important than ever that mature trees are protected. Yet there is a very large number of applications to list trees that council has not processed due to a lack of budget. As part of our feedback into council’s 10-year-plan, the Kaipatiki Local Board requested “that funding is included in year one of the 10-year Budget 2021-2031 to progress a Plan Change to review Schedule 10 of the Auckland Unitary Plan to increase tree protection across Auckland, process the backlog of notable tree applications, and support the Ngahere Strategy and tree coverage across the Auckland region.”

Here is the text of the article if you can’t see it: